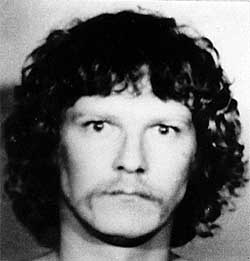 Darren O’Neall didn’t have a positive childhood which would mold him into the person he became. A psychopath.

O’Neall grew up a pathological liar and when he hit his teen years he became interested in watching and performing violent sex acts and taking part in illegal behavior. He had impregnated woman and left them to fend parenthood alone. A transient, he traveled the western United States reading the novels of his favorite author, Louis L’Amour, who would regularly write books about cowboys, Indians, gunslinger, outlaws, Texas Rangers and frontier marshals. O’Neall envisioned himself as the characters he read about and even assumed alias’ using their names.

As a teenager he would commit petty thefts and other illegal activity. He never had a proper home life to give him any balance and his behavior continued to grow more dark. As he grew older he started frequenting bars and pubs and remained a loner who went unnoticed among the public. In fact, aside from family and the few friendships he managed to have, it seemed the only people who knew about O’Neall were different Law Enforcement agencies throughout several states. Officers would describe him as a man who kept on his feet most likely in an attempt to stay one step ahead of the law.

Petty thefts would soon turn  to burglary and robbery, carjackings and then assaults, and in 1987 his crimes would turn fatal and ruin the lives of many families.

Robin Pamela Smith, born in New Britain, CT, on April 4, 1965. On the night of March 28, 1987 when she was 22 years old, she left her home for a party with her new friend, “Herb Johnson”. Family and friends didn’t know much about her new male friend. They also didn’t think for a moment that she would never return home.

Photo of Robin Smith as a child (age 11)

On May 1, 1987, over one month after Robin vanished, police found her vehicle abandoned near Marysville, north of Seattle, WA. When they searched the trunk they found her bloody clothes and several of her teeth. She had been bludgeoned to death with a hammer. Police already feared the worst but after the gruesome discovery they were certain of her death and immediately started to investigate to determine a possible suspect. A check on the vehicles registration revealed it had been stolen two weeks prior in Nampa, Idaho.

The owner of the vehicle was a trucker who recalled the thief in vivid detail. He described a young, blonde man with the word “JUNE” tattooed on the knuckles of his left hand. The trucker had picked him up and offered him a place to stay the night.

Apparently no deed goes unpunished and when the trucker woke up the following morning the unidentified man was gone and his vehicle had been stolen along with his licensed gun, a .357 magnum revolver.

The tattoo description gave authorities a clue which would eventually lead to the culprit. A culprit who was running from child support payments after abandoning his wife and child six years earlier. Sadly, by the time Robin wasn’t the first nor the last victim of the killers bloody rampage on woman.

Read Crime Library – Serial Killer Darren O’Neall for the full in-depth look into the life of Darren D. O’Neall, before, during and after his murder spree.

For shorter versions of this case, read Murdapedia – Darren D. O’Neall for a list of articles.