Mindy Schloss was 52 in the Summer of ’07 and a popular, ambitious nurse psychologist. The happy, dark-haired woman was attractive and when she smiled her eyes reflected her happiness. In the weeks prior to her murder, she had been making good on plans for the next stage of her career. After spending the majority of her working life laboring for others — and commuting long distances to Fairbanks, Alaska — she had recently signed a lease for an office in Anchorage. She was going to start her own practice and become her own boss, accomplishments that would have also benefited the citizens of Fairbanks. People with her expertise were, after all, rare in those parts. Sadly, Mindy Schloss would not live to realize her longtime dream of professional independence.

Joshua Wade, resided at 6902 Cutty Sark Road, the house next door to her own. He was already, in his own mind, living intimately with her, watching her, fostering a sexual rage and waiting to take that intimacy to the next, deadly level. His bedroom window allowed him voyeuristic access to Schloss’ kitchen and, as a result, it’s safe to assume that Joshua Wade’s watched Schloss going about her daily domestic routine as his life spun ever more wildly out of control, and that his sexual frustration, anger, and violent, lethal rage settled on Schloss.

Rewinding back to Wade’s earlier years, he spent most of his life in detention centers and when he wasnt in a detention center he was being arrested (then released) for one crime or another.

According to documents introduced into evidence by the prosecution, Wade “has demonstrated violent and aggressive behavior from on or about the age of 10 and continuing into his adult life, and between 2000 and 2007, has violently killed two women.” Wade’s first brush with the law was at age 12. At 16 he was caught carrying a handgun, and by 19 he was an accused-but-acquitted felon. Unfortunately Wade’s criminal career was only getting started.

The next year, at age 20, Wade violently raped and murdered Della Brown, a 33 year-old Native American woman by bashing her head in with a rock. When he was through, all that was left of Schloss was decomposing in the woods near Wasilia, Alaska. 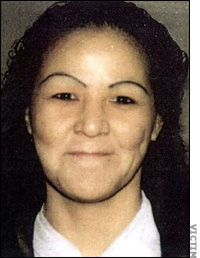 During the trial the coroner testified that Brown’s skull was so damaged it resembled a “bag of ice.” Brown’s hair had either been cut or ripped out; and burnt matches littered the shed’s floor near her body. Brown’s body had been found by unsympathetic gawkers who paraded through the shed for days, lighting matches to see her battered corpse. No one called 911. Although initially Wade confessed to the murder, he soon recanted. His lawyer claimed that Wade had merely been trying to impress his associates.

The jury was swayed by his defense, and Wade was acquitted of Della Brown’s murder. He was, however, convicted of evidence tampering in the case.

After the acquittal, Wade, who has the unfortunate tendency to grandstand, stated, “Even though 12 people said I’m not guilty, everyone believes I am guilty….I just want to say thank you to my jury for being fair.”

He went on to say, “The only thing at all in this case that I’m sorry for is I did not call the police whenever I found that lady’s body,” clearly showing no remorse for the crime of which he had been convicted.

Fast-foward to the night of August 3rd, 2007. Wade turn’s his sick fantasy into reality.

Wade and his housemates threw a party. This was the end of a long, difficult week at work for Wade. He had several combative exchanges with his supervisors, and had even gone so far as to walk off of the job. The day of the party Wade arrived at his job only to be sent home for his argumentative and aggressive behavior.

Sometime around 1:30 a.m. Mindy Schloss signed out of her email and shut down her computer. According to the timeline established by investigators, she then went to sleep. Not long after, Wade made his way into Schloss’ home, subdued her, and painfully bound her arms and legs with plastic restraints, zip ties commonly used by law enforcement. With Schloss immobilized, Wade returned to his house, retrieved his Glock and returned to abduct Schloss in her own vehicle. They stopped at several locations, including at least one ATM where Wade withdrew cash from Schloss’ checking account.

After her disappearance when police canvassed the neighborhood, a neighbor reported hearing a woman’s screams in the early morning hours of August 4. According to court documents, this “witness observed a small red car matching generally the description of the victim’s car in the parking lot of a bank, and heard a woman’s voice in that area screaming loudly ‘Rape!’ and ‘Call the police!’ or words to that effect.” Although the court documents do not specify, it seems, sadly, that no witnesses contacted police that night with this information.

After Wade was done robbing Schloss, he drove her nearly an hour away to Wasilia, Alaska, where he marched an abused and tortured Schloss into the woods and unceremoniously executed her.

It took nearly a month before her decomposed remains were discovered.