01/10/13, CHINA — A Chinese serial killer was finally executed today after spending six months in a Chinese jail for the murder and dismemberment of eleven Jinning County residents.

March, 2008 thru April, 2012, Zhang Yongming, 57, strangled eleven boys and young men, all residents of Jinning County. After murdering his victims, he would chopped them to pieces and then sell their flesh as ostrich meat at the local market. He would then burn any leftovers in an attempt to destroy evidence. 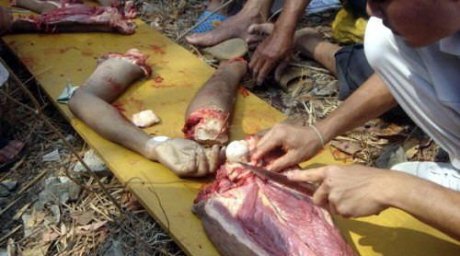 He was finally arrested in the beginning of May, 2012 in Nanmen village which is located in Yunnan province. He was investigated over the murder of one of his last victims, a 19-year-old man. When police searched his home they found the young man’s cellphone, credit card, etc, but the most gruesome discovery was numerous eyeballs being preserved in wine bottles. Which is a traditional practice in the Asian culture with snakes, to make “snake wine” and dried human meat.

After discovering the evidence, Zhang was immediately arrested and the following month he was sentenced to death by Kunming Intermediate People’s Court.

The court deemed his acts “extremely cruel” and that the consequences were going to be “extremely serious.” He was also denied his political rights for the rest of his (short) life.

This isn’t the first time Zhang was sentenced to death. He was given a death sentence with a two-year reprieve for homicide in 1979 when he was 24 years old. He was released in September 1997 at age 42 after receiving a number of several sentence reductions. But despite having his life saved and getting a plot of land and compensation from the government, Zhang continued to commit crimes.

In his village, Zhang was known as a “Cannibal Monter”. But despite the suspicion of other village goers, and the fact that he had already been sentenced to death and released, he was able to get away with multiple murders over a four-year time span.

The other villagers told a local reporter that they had witnessed what they believed to be white bones protruding from the top of green bags, which were hanging from Zhang’s home.

According to MailOnline, Beijing administration refuses to publish its execution statistics and is believed to have the highest rates in the world. The latest report from Amnesty International predicts ‘thousands’ every year, whilst U.S.-based advocacy group the Duihua foundation estimated that 4,000 prisoners were executed in 2011.