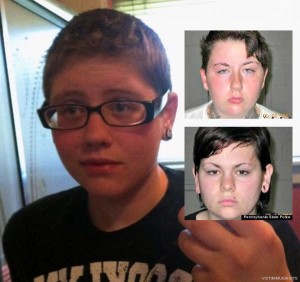 → Ashley Marie Barber, 18, and Nicole “Jade” Olmstead, 20, were arraigned in Crawford County on August 24, 2012, for the murder of Brandy Stevens-Rosine, a student at Youngstown State University, and Olmstead’s former flame. The couple confessed to the murder at a preliminary hearing in July, revealed the gruesome details of the brutal murder to the court.

On May 17, 2012, Stevens-Rosine went to visit her ex, Olmstead, at the home she shared with her new partner, Ashley Marie Barber, 20, in Wayne Township. The couple lured her into the woods, kicked and beat her, strangled her — but not to death. Barber then head butted her, Olmstead beat her on the head with a shovel until her brains spilled out, and they repeatedly smashed her head against a stump. When they realized that Stevens-Rosine was still breathing the women bashed her face in with a large rock and poured water into her mouth and nose to drown her. Ultimately they buried her alive in the shallow grave prepared beforehand. The coroner’s report concludes that Stevens-Rosine died from asphyxia caused by dirt in her airway consistent with having been buried alive. Reports thus far have not mentioned how long the attack lasted, or how long Stevens-Rosine’s suffering would have lasted. The motive for the murder is also not clear. Both women are charged with one count of criminal homicide, conspiracy to commit criminal homicide and tampering with physical evidence. If convicted they will face life in prison without the possibility of parole — but not the death penalty.

District Attorney Francis Schultz decided, “after careful consideration of the law and the facts that have been uncovered in the investigation of this case,” not to ask for the death penalty in this case, he added that though the murder was “brutal,” the allegations did not meet Pennsylvania’s criteria for the requesting the death penalty: Murder in the first degree with at least one of 18 possible aggravating factors. Schultz stated that a first-degree murder case might qualify for the death penalty if the “offense was committed by means of torture.”

SOURCE: Click the photo provided which will link you to the original article.